The Secret Chamber of Osiris with: Scott Creighton 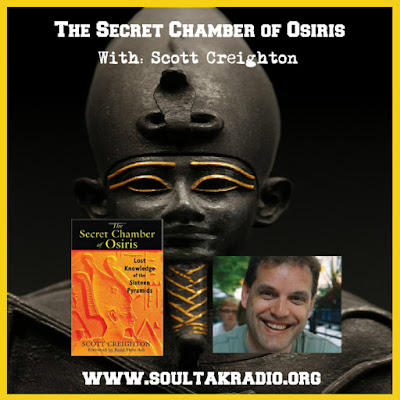 After nearly 200 years of the pyramid-as-tomb theory, a growing body of evidence suggests the first 16 pyramids of ancient Egypt were not royal tombs but nearly indestructible recovery vaults designed to revive civilization after an anticipated major catastrophe, the Deluge of Thoth.

Scott Creighton examines the prophecy of catastrophe and the ancient Egyptians’ massive undertaking to ensure the survival of their civilization. He explains how the pyramids acted as easily located storehouses for seeds, tools, and civilizing knowledge, yet they would have been too visible to house the precious treasures necessary to restore the rich culture of ancient Egypt. For this, the ancients created a secret chamber whose existence was hidden in myth and whose location was encoded in the Giza pyramids.

Creighton shows how, collectively, the first 16 pyramids represent the allegorical “dismembered body of Osiris,” the Egyptian god of agriculture and rebirth, and, as in the myth of Osiris, one part is missing or hidden--a secret chamber under the sands of the Giza plateau. Creighton reveals how the 3 great pyramids of Giza “point” to the secret location and how they were built with technology akin to modern hot air balloons, used to “fly the stones into place” as cited in Egyptian legends and shown in ancient art.